February -  POP members Neha, Shivani, Goutham gets recognized by President of USA for their community service. 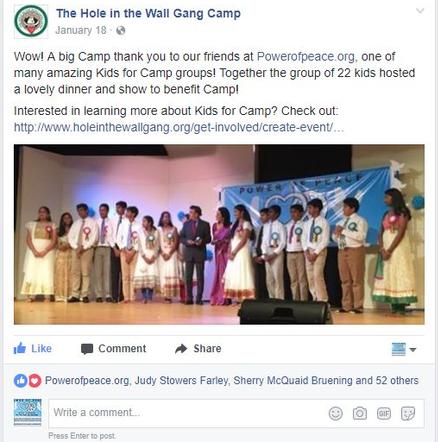 February -  Atma Vidya Ashram's (our orphanage's) free computer education project for poor and needy children starts.  Computers and teaching arrangements are in the process of getting set up at 1. Mallavarm school in Andhra Pradesh, 2. Nidadavole, Andhra Pradesh and 3. Bangalore Ashram in India. We are excited for the children. We got the confirmation in September that the program is shaping and running well.

March 26 -  POP members get invited to meet the CEO of Hole In the Wall Gang Camp and attend camp's annual Bandit Round Up. This is a "hole" afternoon of FUN including a lunch, tours and a special presentation featuring camper parents.